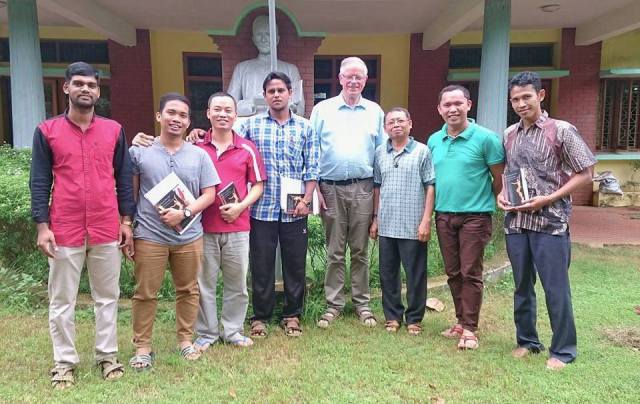 John van den Hengel was invited to give one week of presentations on the life and charism of Fr. Dehon to the final vow candidates of Asia. Between June 13 and 17 he was in Aluva in the state of Kerala working with Andreas Wibhargiyanto (INA), Rogereve Pausanos (PHI), Junlou Arcayos (PHI), Nguyen Van Bat (VIE), and Vineeth Anthony (IND). All of them will be making final vows later this summer. Aluva is one of the first houses built in India in the time of Fr. Martin van Ooij. It is currently the house of philosophy with 40 students.

It was the time of the annual monsoon. It lowered the temperatures but also made the daily time for sport quite a wet affair. Playing soccer in six inches of water is quite a challenge. The community is also seeking to become more self-sufficient. It now has four cows, 200 chickens and a good number of ducks, a fish pond and a newly planted banana plantation. For us who live in aging communities it is a pleasure to be surrounded by young and loud students.

After the presentations in Aluva, the District brought me to the new District house in Chennai (Tamil Nadu), the scholasticate of Eluru, the seminary in Gorontla, the novitiate in Nambur (all in Andra Pradesh) and the new parish on the outskirts of Mumbai. It is a vibrant country with horrendous traffic in the cities and quiet country sides. Our community has grown to around 100 members with most of the activity still centered on the houses of formation and a small number of parishes.

I was in India last in 2011 to give the annual retreat. With another five years of experience being a District in the Congregation, our community there has grown in maturity. When I was there last, most of the Dehonians from other parts of the Congregation had just been forced to leave; it was a young, too young, a community who had to forge ahead without the experience of others. Now five years later, it is clear that they have succeeded in creating their own style of being Dehonian.