Minutes of the Regional Chapter

The minutes of the Regional Chapter of June 6, 2018 were prepared by Peter McKenna. A translation will be provided by Richard Woodbury. The minutes were sent to Rome in preparation of the General Chapter to be held from July 14 to 27.

Each time that we as a Congregation meet to do chapter, there is a sense in us of opening another avenue to the future. We think that when we get together and we work together, we are powerful, that together we can create future, that our future somehow is open. We have learned with Pope Francis, that time is more important than space. We realize that despite our dreams to reach some goal, to attain certain heights that we actually never reach that goal. In trying to reach the goal, we become aware of our limits, aware of the obstacles, our fragility. And we learn that this is actually good. Our obstacles, our limits, our weaknesses can be more galvanizing than all our accomplishments. Why? Because only by knowing what prevents us from reaching things can we learn to do things differently.

At the Canadian Religious Conference meeting last week, Elena Lasida, a professor at Institut Catholique in Paris, said that challenges, limits, our difficulties, our faults carry within them a promise. They can put us on the road to the unexpected. That is the direction that Biblical Wisdom sends us. In a period when Israel was in its deepest darkness, when it lost its way and was forced to live among another people, much more successful than they, when Israel found itself in exile, when all seemed impossible, when their existence as a people was most in doubt, that was the precise moment when Israel discovered the great truth of God’s creation. The biggest dreamers in Israel’s history, the biggest dreamers of the bible, people like Moses and Abraham lived all their lives out of a promise. But neither Abraham nor Moses ever achieved the major goal of their lives. Moses never entered the promised land. He could only see it from afar, but he could not enter it. Abraham went to the land he was promised but never possessed it. He had to buy land to bury Sarah. Israel when it found itself in exile, it learned that it needed a second exodus, because the promise of the land was not a possession, but a process.
Process is always superior to space.

A chapter makes us realize that what we thought was our goal has shifted. Only three years ago we celebrated Chapter. Today we enter into this process again. And we pray today that we may continue to go on the journey, that we continue towards a future that will never come, a future to which we never arrive. Because it is always more, always greater. All we need is a way of working together. We do not necessarily need to arrive. We do not need a clearly laid-out plan. Dehon had a clear view of this. He wanted us to be united with Christ, to join him on the journey, to take on the attitudes of Christ, to become like him. He wanted us to have a relationship, not necessarily a destination. He knew a beginning, an origin, which was the love of God. He was more interested in the way than in outlining the parameters of the final goal. Time is superior to space.

We do chapter because we want to be on the way and stay on the way. As a Region we developed a ten-year plan. But the plan does not outline what final space we will arrive at, we outlined some of the things we hoped to discover together as a community, how we would seek one another from different entities, from different cultural backgrounds, and enter into a journey of discovery. Utopia is always the two steps beyond the horizon. Our chapter today does not have much content. It is part of a process.

It is with this promise which we are to one another that we dare to open up our chapter, and through our chapter to a general chapter. The process set out three years ago with new people will probably be revamped, the congregation may be going into another direction than what was envisaged three years ago and we trust that it is right that we do so. Time, as Pope Frances said in his recent Apostolic Exhortation, is superior to space.

Let us enter into this new time, this new road.”

The Agenda as presented was unanimously approved.

The composition of the Region 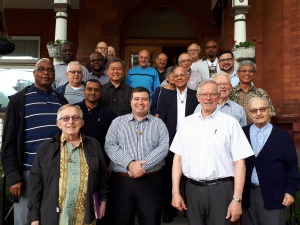 Help from other Provinces/ Regions/Districts
Without the help of other entities, the Canadian Region would consist today of only ten members. With the addition of members from other entities, the average age of the Region has declined in the last three years from 71 to 65 in 2018. The new members have injected new life and energy in the Region. They made possible the acceptance of the 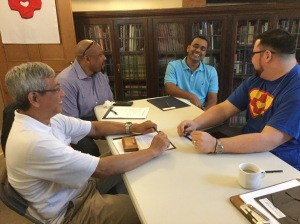 Unité pastoral “Saut-au-Récollet” in Montréal and the parish St. Thomas More and Our Lady of Rosary in Scarborough. The presence of members from other entities has made it possible to broaden the outlook and the spirit of the Region through making the communities more international in character. Their presence has had a considerable impact on the life of the Region

In November 2015 the Region proposed a ten-year plan in order to determine how the Region of Canada might continue its mission in Canada. The Regional Assembly of 2016 adopted a seven-point plan.

1. Strengthening of community life through
a. a community pastoral plan
b. a reflection on our Dehonian identity
c. regular community meetings and interaction
d. an assessment of the properties of the region

2. Formalizing our relations with our entities in the Congregation through.
a. The establishment of formal agreements with other entities
b. the invitation to join the entity after one year of presence
c. the creation of authentic international communities.

3. Working with refugees and migrants in Canada through
a. sponsorships of refugee families
b. participating in the North American Committee on Migration
c. the featuring of the issues on immigration in Canada in our communications.

4. Establishing a new vocational ministry through
a. a part –time vocational director
b. the development of concrete strategies to attract new members.

5. Promoting the Dehonian Family through
a. the establishment of a program in our parishes
b. the promulgation of materials and resources.

6. Strengthening the Dehonian spirituality in the Region through
a. the North American Dehonian retreat
b. participation in the Dehonian Theological Commission
c. conferences and research on the Founder.

With amendments incorporated, the Report of the State of the Region of Canada 2015 – 2018 was unanimously accepted.

DISCUSSION OF THE STATE OF THE REGION OF CANADA REPORT

ELECTION OF DELEGATE/SUBSTITUTE TO GENERAL CHAPTER